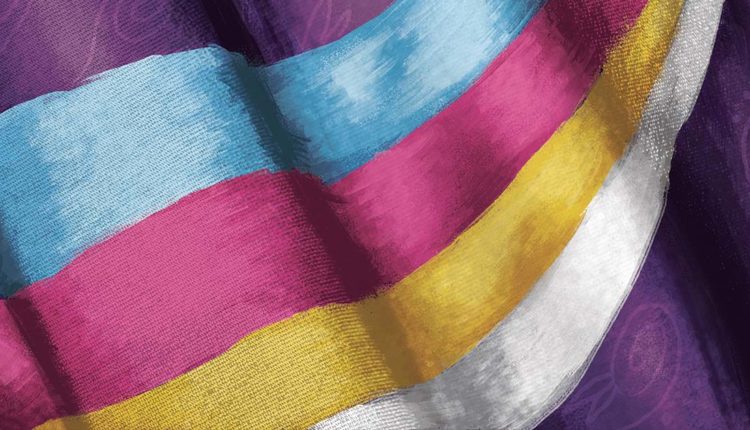 Ribbon Skirts are not only a distinct fashion piece to the non-indigenous eye but are also a historical and traditional form of identity among native women. Skirts are worn not only in traditional ceremonies but now in political protests, the U.S. Congress, and more recently the Minnesota Governor’s office.

The ribbon skirt, which is a symbol of womanhood amongst native communities, tells a story of adaptation and survival. Mainly how tribal communities have adopted western culture and made it our own. The skirt: sacred, spiritual and political holds centuries worth of history between its seams.

The skirt got its bearings in the late 18th centuries as relationships between the Great Lakes tribes and French settlers expanded, and more goods including ribbon were exchanged. Ojibwe clothing which was previously made of animal hide began being replaced by garments of wool and cotton with the traditional applique style of ribbon work you see today being worked in over time.

According to the Milwaukee Public Museum, “The first recorded instance of ribbon work appliqué was on a Menominee wedding dress made in 1802. Ribbon work reached its peak in the last quarter of the 19th century, having moved out from its epicenter in the Great Lakes to several tribes in the Prairies, Plains, and Northeast. Though the materials used to make ribbon skirts are not native in origin, the method of applique done to create the folded looked of the ribbon has become a visual marker of identity for centuries.”

Leech Lake Tribal College Instructor, Audrey Thayer says when it comes to skirts, people need to see them through two different lenses; a spiritual one and one that is political. In Ms. Thayers spiritual healing lodge, women often wear traditional ribbon skirts featuring colors sacred to the lodge and the tribe itself, often to identify themselves to the creator as a woman.

Thayer who follows her own individual lodge teachings is like many Indigenous-Americans who understands the importance of living and learning our culture. Throughout the years, many families have adopted different teachings about the skirt within ceremonies but Thayer believes regardless of one’s individual and family teachings, it’s important to recognize what the skirt means as an identity.

“Understand that it’s both a political and spiritual significance when you see those ribbon skirts. It’s about surviving genocide, we’re still here, look at us, look at our beautiful nation here. The skirt ties us to the earth, ties us to the ceremonies, and ties us to our political unrest of issues for indigenous people. I would know if I saw women in a ribbon skirt in town that they were connected spiritually or politically to an issue that I could identify,” said Thayer.

The ribbon skirt that we see today isn’t far off from what had been adapted in the past for ceremonies, but it has now gained new meaning as it reaches the floors of the US democratic system and a new status of symbolism of native pride. Newly elected Minnesota Lieutenant Governor and White Earth enrollee Peggy Flanagan has often been photographed wearing traditional regalia, even during her swearing in ceremony. Flanagan herself says the skirt is reflective of her identity and cultural background.

“When I wear ribbon skirts, I feel the strength, love and protection of my Native sisters and aunties. It’s an embodiment of my role as an Anishinaabekwe and a symbol of my identity in political settings. I feel the most powerful when I wear ribbon skirts because they are a reminder that I am not alone and that there is an entire community and generations of ancestors who are with me at all times,” said Flanagan.

Flanagan is currently the highest ranked Indigenous woman in office. Alongside Flanagans successful office run in 2018 came Sharice Davids and Deb Haaland who both made history election night as they together became the first native American women ever elected to congress. Haaland has also been photographed wearing traditional clothing pieces relative to her Pueblo Laguna tribe signaling a change within the house, which had both written and unspoken rules in the past few decades about both traditional garments, and pants being worn by women who held seats.

On the other end of the political spectrum lies the use and significance of ribbon skirts within social and indigenous movements. Both the 2016 Dakota Access Pipeline protests and the Missing Murdered Indigenous movement showcased the skirts symbolism at the forefront of their causes. The skirt saw a rise in popularity during the starting time period of both of these movements as more people than ever before were exposed not only to Native American activism but culture as well thanks to the men and women who remain involved in these causes.

Wenona Kingbird, Leech Lake Human Services Child Abuse Prevention Coordinator and a Bemidji MMIW event volunteer believes the skirts rise to prominence is what the community needed as the strength and identity held in such a garment is truly powerful. Kingbird herself even took time during Bemidji’s 2019 MMIW event to hold a local class to teach community members how to make skirts, later even providing additional skirts she made to the events participants.

“I think the skirt in general has really made a comeback, it has become more prominent. We use these skirts for ceremony and dancing and things like that and I think it makes people feel strong and it’s empowering. I think when you look at movements like MMIW, it’s driven by women. The strength of the women, we’re going to want to wear our skirts, we’re going to want to bring our strength into it. Those skirts are our identity, it houses us. The skirts we make touch the earth and the things that we as women are taken care of. I think it’s a natural thing to want to do is wear these skirts with the movement,” said Kingbird.

The skirts, and red dresses often seen in the MMIW movement are representative of the rising number of Indigenous Women who have been victims of violence and have gone missing without data or media representation. The MMIW movement which began in Canada in 2005 aims to combat these figures. Fellow MMIW movement coordinator Tamika-Jo Andy who is a member of the Indigenous Environmental Network women’s leadership group Ogimaakwewiwin and Bemidji MMIW volunteer echoes Kingbird statements, that skirt is representative of strength.

“We’re always going to be fighting for our identity and this is one of the ways we can symbolize ‘we’re still here.’ I’m not going to wear slacks, or a dress shirt because I’m in the House of Representatives now, I’m going to wear what I’m comfortable in, what empowers me, and what lets me express myself,” said Andy.

The dresses and skirts originally once hung to show remembrance of women, have become symbols of strength. The various groups who have pioneered this movement have gotten subcommittees put together and bills passed in Montana, Colorado, and Nevada to help our lost sisters. Minnesota’s own MMIW task force became a reality this fall. They will begin working on legislation suggestions throughout the year and submitting a full report to the state in December 2020.

In part two of this history feature, we will examine ribbon skirts in mainstream fashion and speak to designers and teachers in the area.