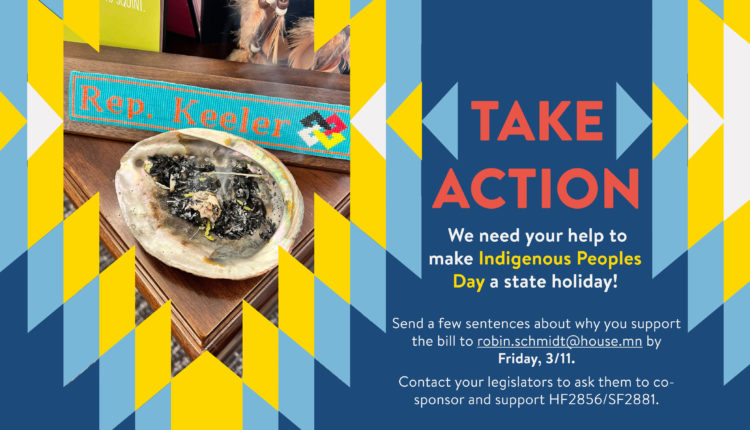 SAINT PAUL, MN – Yesterday, legislation authored by Rep. Heather Keeler (DFL-Moorhead) to establish Indigenous Peoples’ Day as a state holiday was discussed and passed out of the House Education Policy Committee with a vote of 11-7, and one member absent. The holiday would be celebrated on the second Monday in October in place of Christopher Columbus Day. The bill also outlines that if schools happen to be in session on Indigenous Peoples Day, they should spend one hour of the day to focus on Indigenous issues.

“I’ve worked twelve years in Indian education and have worked diligently to acknowledge the importance of Indigenous Peoples Day in our communities,” said Rep. Heather Keeler. “This is something that I started as a local effort, the city of Moorhead passed this and recognizes it as a local holiday along with many other cities across our state, and states across this nation. By passing this bill, we are affirming that our first nation’s people and history matter in Minnesota.”

“For too long we have ignored our state’s Indigenous history while uplifting and celebrating a perpetrator of genocide who never set foot on North America, let alone Minnesota,” said, Rep. Jamie Becker-Finn (DFL – Roseville), co-author of the bill. “This bill will elevate and honor the history of those who first called Minnesota home while teaching students across the state the value of our Indigenous history.”

The bill is now on the agenda to be heard in the House State Government Finance committee on Tuesday, March 15th. The House bill has a companion in the Senate authored by Sen. Mary Kunesh (DFL-New Brighton).

Rep. Keeler has also asked that those who support the bill send a few sentences of testimony to her legislative assistant, Robin Schmidt at [email protected], as outlined in the attached graphic.