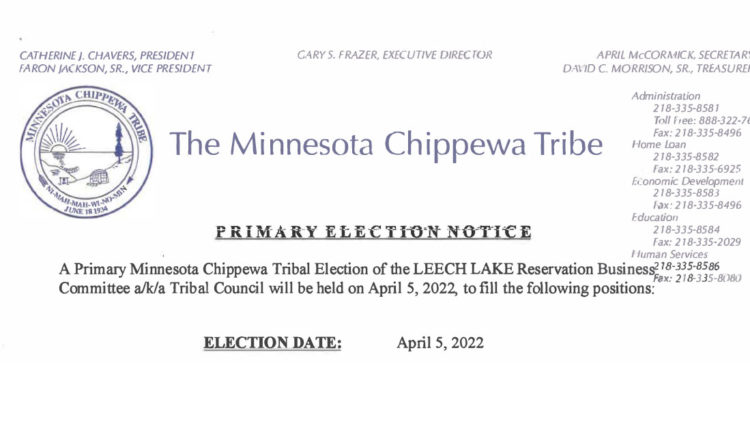 A Primary Minnesota Chippewa Tribal Election of the LEECH LAKE Reservation Business Committee a/k/a Tribal Council will be held on April 5, 2022 to fill the following positions:

Each Band governing body will be the sole judge of the constitutional qualifications of its voters and may, by official action, delegate this responsibility to its General Reservation Election Board.

Eligible voters are enrolled members of the Tribe, 18 years of age or over. All eligible voters shall vote by secret ballot. To be eligible to cast a ballot a voter must meet all constitutional requirements. In addition, to be eligible to cast a vote for Committeeperson, a voter must have resided within that district for at least thirty (30) days immediately preceding the election, unless the voter casts an absentee ballot as permitted by this Ordinance.

Whenever, due to absence from the reservation, illness or physical disability, an eligible voter is not able to vote at the polls and notifies the General Election Board consistent with this Ordinance, he/she will be entitled to vote by absentee ballot in the manner and under the procedures as provided by Section 2.2(B). To cast an absentee ballot for Committeeperson, an eligible voter must have resided within that district for a period of at least thirty (30) days as his/her last reservation residence. In the event an eligible voter has never resided on the reservation of his/her enrollment, he/she must declare in his/her request which district has been selected in which to cast the ballot for Committeeperson. A voter may not thereafter change his/her district for absentee voting purposes without actually residing within a different district on his/her reservation of enrollment for at least thirty (30) consecutive days immediately preceding the election.