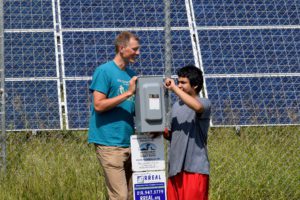 The project began more than two years ago when the Band partnered with the Rural Renewable Energy Alliance (RREAL) to try to make energy more accessible to residents of the reservation.

The community solar garden at Prescott is one of five solar arrays that have been constructed as part of the project. Solar panels have also been installed at Leech Lake Tribal College, the Palace Casino, Jackson Village and at the RREAL offices near Pine River, MN.

The solar panels are expected generate more than $20,000 in revenue per year. All of these proceeds will be funneled into the Energy Assistance program at Tribal Assistance where it will help low-income band members pay their heating bills.

This aspect makes the project truly unique and it has been recognized as the first in the nation to be formally integrated with the energy assistance program. It’s also the first, 100 percent low-income community solar installation in the state, as well as the first in the U.S. on tribal lands. The project earned a Clean Energy Community Award from the MN Dept of Commerce in 2016.

The project also benefited the Leech Lake Tribal College where students received hands on training working in the renewable energy industry and were able to obtain licenses in the field. Several graduates of the program were later hired by RREAL to help in the construction of the solar arrays.

Jason Edens, Director of the Rural Renewable Energy Alliance described how projects such as this play an important role in fighting against energy poverty.

“People around this area are starting to think about the heating season and about the choices they will make. Many people hear about the heating season, though and think about cross-country skiing or snowmobiling,” Edens said. “Those aren’t the choices that I’m talking about. I’m talking about those people who have to choose between paying their home energy bill or their health care bill. Families with those choices are living in energy poverty.

“What we’re advocating is that clean energy, like this solar energy, is a powerful tool in the fight against energy poverty and we can permanently address it by delivering solar power directly to low-income communities.”

Environmental Deputy Director Brandy Toft who emceed the event, noted this project is one of many that the Band has undertaken to promote a sustainable future that correlates with Anishinaabe values.

“Next to the solar array is a 300-tree apple grove; we have 17 solar panel furnaces on the reservation; we’re working to become Styrofoam free; and we’re involved in a guaranteed energy savings project that will decrease energy usage by 40 percent at 22 buildings,” Toft said. “These are all little aspects of what we’re doing. I know today is all about solar, but this is part of a complete package that we’re doing.”

Near the end of the festivities, Outgoing Division of Resource Management employee Matt Rogotzke was presented with a plaque in recognition of the outstanding contributions he has made towards this project and many others on the reservation. Matt will be leaving us to attend graduate school and we would like to wish him the best of luck in his future endeavors. Miigwech!