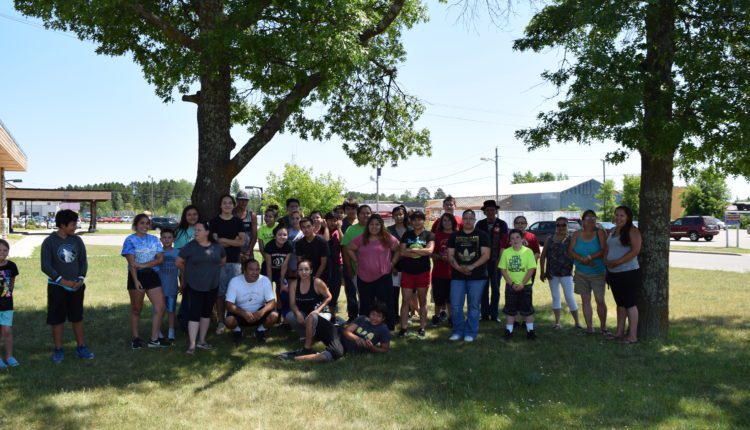 The conference is a chance for Native youth from across the country to participate in a multitude of activities and network amongst themselves. The theme for this years conference was “Finding Wellness & Healing Within our Cultures”. With more than 1700 participants it was the largest Native youth gathering in the country.

On the drive to Denver, the Leech Lake youth made a stop at the Standing Rock Indian Reservation, site of the Oceti Sakowin and other camps which formed in an effort to resist the Dakota Access Pipeline. Once at the conference they had a chance to hear from Dave Archambault III, Tribal Chairman at Standing Rock, who was one of many keynote speakers at the event.

Participation in this years conference was made possible in part by a grant the Youth Division received from the Minnesota Juvenile Justice Advisory Council earlier this year.

The “Wellness Warriors” app was also unveiled at the conference. The mobile app is designed to help you track wellness from a cultural perspective – fitness through cultural dance, healthy eating with traditional Native foods, and more.

The UNITY Wellness Warrior app was made possible through a grant from the W.K. Kellogg Foundation. The app, developed with input from Native youth, is free and available via the App Store and Play Store.
Next year’s National UNITY Conference will take place from July 5-9, 2018 in San Diego, California.

UNITY’s mission is to foster the spiritual, mental, physical, and social development of American Indian/Alaska Native youth and to help build a strong, unified, and self-reliant Native America through greater youth involvement.

Underpinning the UNITY philosophy is the belief that the most effective way to bring about positive and lasting change among American Indian/Alaska Native youth is to prepare them to become informed and contributing members of their tribes, villages, communities, States, and Nation.