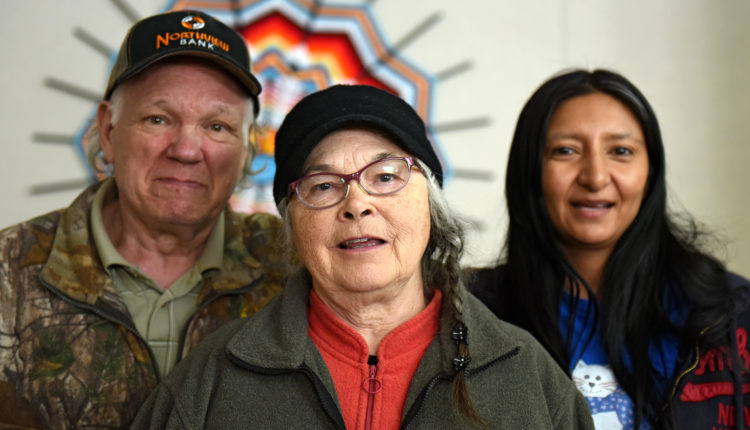 Well, I’m really not sure where to start off the article, because we do so many things together as a family. I guess when Margaret decided she wanted to back to school, at Bemidji State University in the fall of 2016 to take up the courses in Ojibwe Culture and Craft, would be the place to begin. When she started attending classes, I would drive her there, drop her off, go about taking care of the things that I needed to do, then eventually pick her back up.

As the semester progressed, she would tell me about the things that she was learning in class, which piqued an interest in me, being a major in history. However, a lot of the things that I’d learned in history were a distortion of the true events. So, rather than running around town, I started to hang around the American Indian Resource Center. By talking to some of the students, I started to understand things in the correct way. Much to my amazement, the facts of the history of America turned out to really be sanitized to make it seem glorious, when in reality, it was stained in the blood of the atrocities of genocide.

With these newfound facts, I decided I wanted to know more of the real, unadulterated truth, thus leading me to sit in on the Ojibwe Culture course. Having done this, I decided I wanted also to go back to school and begin to learn more. Margaret went on to take Federal Indian Law where she learned about the depth of control and mistreatment that have been forced on the indigenous people of America throughout the centuries.

Over the next summer, we attended different Ojibwe functions, taking in more knowledge and facts. One event was a Tuesday night community gathering at Diamond Point Park where we met Ann Humphrey, representing Leech Lake Tribal College. Ann proceeded to tell Margaret about a program that was offered at the college for seniors over 55 years of age that offered one free 3 credit course per semester. She told Margaret that they like to have their Elders on campus as role models and to encourage the other students. Ann mentioned that when she went to college, she missed seeing her elders and having them around. That had impacted her so much that she really encouraged Margaret to consider going to LLTC.

Margaret mentioned it to me. We discussed it and decided that because we were water protectors, we really wanted to learn more about this environmentally sensitive subject. We decided to take the Freshwater Studies course, taught by Melinda Neville. At that time, we were taking one class at BSU and one at LLTC. We fell in love with the staff and students here at LLTC and felt at home. Being a smaller college the classes were more intimate. We seemed to fit right in.

I, Tom, was a little concerned as I am nonindigenous and was not sure how I would be received. I found everyone to be respectful, very helpful and pleased I was here. What we experienced here at LLTC was nearly overwhelming at times, as we were respected as elders and seen as having value and worth in the eyes of the younger students. That spoke volumes to us and encouraged us to continue to come here.  LLTC became our 2nd home. At the end of the semester, we decided we wanted to come back to LLTC and take the Ojibwe Language with Bob Jourdain.

Back in 2015 Margaret lost her youngest daughter to breast cancer. During her illness, the Creator brought a young Ojibwe woman into our lives who needed a family to love and nurture her. We adopted her, and now she is our daughter. We then became the grandparents of her 5 wonderful children. Misty wanted to go to college also but felt she couldn’t afford to, and because her kids were in school, she didn’t see it in her future. Since we were going to take the Ojibwe Language, we encouraged her to go with us. She didn’t know her identity through her culture or the Ojibwe Language, which we felt would be enriching to her and her children. At the last minute, she decided to join us.

The three of us are now in Bob’s Ojibwe Language class and learning together. Misty is very surprised at how well she is doing. She had heard some of the language from her grandparents but not much. Her children are learning how to count in Ojibwe along with her. It is so exciting for us to see Misty blossoming into the confident, strong woman she is. We are so proud of our daughter and very glad that she is discovering her identity as an Anishinabe. We are learning together as a family, not just the three of us, but as a larger family entity with Misty’s children, our grandchildren and our LLTC family. Miigwech.

Construction begins May 14 on Palace Rd project in Cass Lake