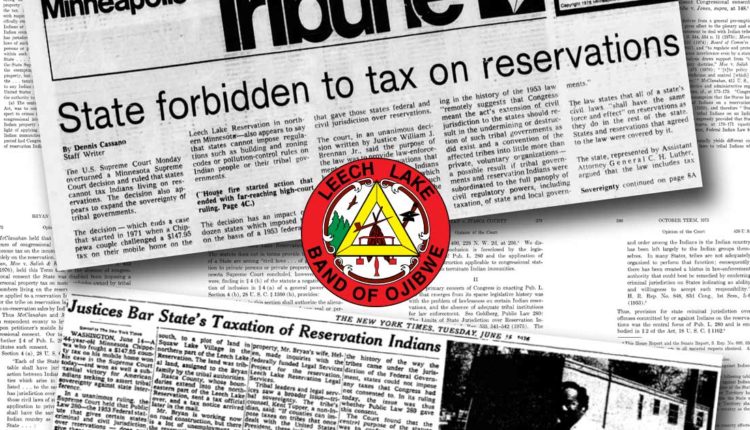 June 14th marks the anniversary of the landmark U.S. Supreme Court decision in the case of Bryan v. Itasca County. The historic, unanimous decision was delivered by Justice William J. Brennan Jr. on June 14, 1976. The Supreme Court ruled that Public Law 280 did NOT grant states civil regulatory jurisdiction over Native Americans living on reservations. This was a huge step forward in advancing tribal sovereignty throughout Indian Country.

Leech Lake Band member Helen Johnson and her husband Russell Bryan, lived near S. Lake in the northern part of the Leech Lake Reservation. To this day, Helen still resides on the property over which the initial dispute arose. In 1972 they received a series of tax bills from Itasca County for their mobile home. The County was seeking a total of $147.95 from the couple, who could not afford to pay at the time. They turned to the newly established Leech Lake Reservation Legal Services Project, now known as Anishinaabe Legal Services, for help. Over the next four years, their case made its way through the legal system, beginning in the District Court of Itasca County, all they way to the highest court of the land, where it was decided once and for all.

“If Congress in enacting Pub. L. 280 had intended to confer upon the States general civil regulatory powers, including taxation, over reservation Indians, it would have expressly said so”

At the time of the decision, the most significant impact was the taxation of Native Americans. As history has shown, the impact was much greater. Just 11 years later another tribal case appeared before the U.S. Supreme Court for a decision. This case is known as California v. Cabazon Band of Mission Indians and overturned the existing laws restricting the gaming industry on Native American Reservations in the U.S. Their main argument was that the laws restricting gambling in California were civil regulatory laws. Using the decision rendered in Bryan v. Itasca, they successfully argued their position and the Supreme Court ruled in their favor. The Cabazon decision, which drew its substance from the Bryan decision, led to a rapid growth in the Indian Gaming industry. The following year (1988) Congress passed the Indian Gaming Regulatory Act. The rest is history.