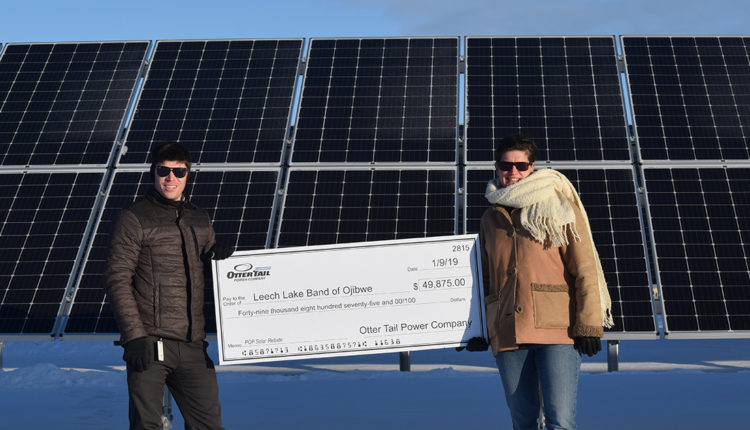 CASS LAKE- In early January, Otter Tail Power Company awarded the Leech Lake Band of Ojibwe $49,875.00 as a rebate for a solar project completed at the Tribal Headquarters last year.

Leech Lake is expected to earn up to $170,000 in rebates from multiple utilities serving Leech Lake for energy efficiency measures. Otter Tail Energy Management representative Roger Garton says this initiative is not only good for Otter Tail, but the Tribe as well.

“The energy generated by the solar panels outside the government center offsets electric usage inside the building, resulting in a cost savings for this facility’s electric bill. As a public building, these savings are passed directly back to the community in the form of lower operating costs for this facility. Passing these savings back to communities is the intent behind our POP Solar Program’s focus on public facilities,” said Garton.

While the GESP project is expected to be completed in late February , Leech Lakes Environmental Deputy Director, Brandy Toft says the projects end only signals bigger things on the way.