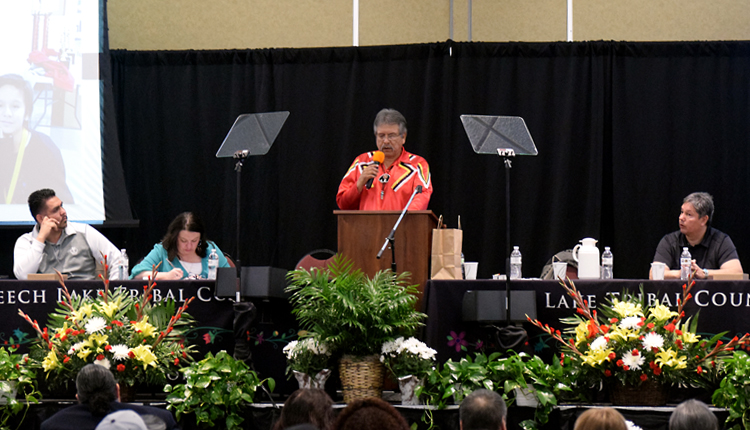 Chairman Jackson’s speech covered a wide a variety of initiatives underway including announcing the early planning stages of a family healing center, the upcoming wellness center, and the return of the opioid summit as well as the launch of a youth summit regarding the struggle of addictions which will take place later this year.

Jackson also touched on the decision made to expand the youth program budget, the 30 new housing developments and the Cedar lakes casino which is set to open this August. Jackson also called for a moment of silence during his address to honor the late White Earth Chairman Terrence “Terry” Tibbetts, who passed earlier this month.

More than 600 band members were in attendance alongside both state, tribal, and county officials. U.S Senators, Tina Smith and Amy Klobuchar, US House of Representative for the 6th District Betty McCollum, as well as MN Attorney Keith Ellison all greeted the crowd remotely through video.

The overall theme of this years State of the Band Address was “Promoting Positive Energy.” Chairman Jackson chose this years theme based on the power positive energy can have on both individuals and community as stated in his written letter.

Mike Smith provided a blessing and invocation for the event and the Leech Lake Honor Guard posted colors on stage. Also in attendance was the Leech Lake Nation Drum group who provided both the welcoming and flag song.

Following the speeches, lunch was served and door prizes were gifted to those in attendance.

Video coverage of the event will be available on the Leech Lake Band of Ojibwe Facebook page early next week.