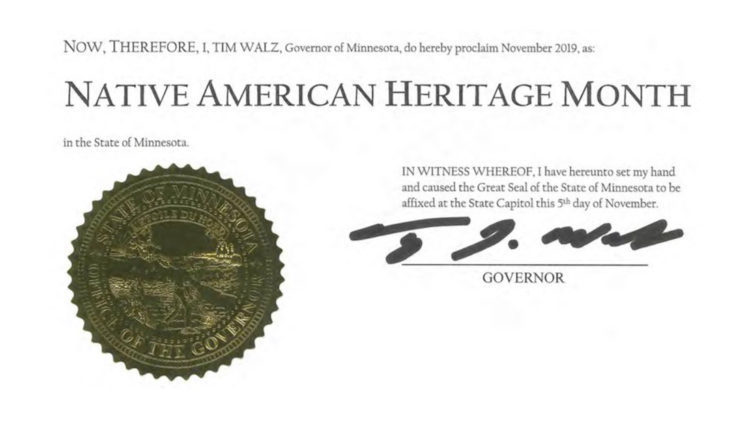 In a move that upset many in Indian Country, President Trump declared November as a time to celebrate both Native American heritage and the country’s founders. Trump unveiled his new National American History and Founders Month proclamation to coincide with the National Native American Heritage Month declaration on October 31 of this year.

On November 5th, 2019, Governor Walz and Lieutenant Governor Peggy Flanagan marked the start of the month with an official proclamation recognizing Tribal Communities. Flanagan, in a post shared on social media, said “We’re proud to proclaim November as Native American Heritage Month. This month, we honor the vibrant Native American cultures that are a part of our state and renew our commitment to government-to-government relations.”

One of the earliest documented advocates of heritage month before it went to the government level, was a Seneca man named Dr. Arthur C. Parker who was the director of the Museum of Arts and Science in Rochester, N.Y at the time. According to the Bureau of Indian Affairs historical recollection, Parker convinced the “Boy Scouts of America to set aside a day for the First Americans” which they did for a running of 3 years from 1912 to 1915. Across the country at the same time Reverend Red Fox James also known as Red Fox Skiukusha began a 4,000-mile trek on horseback to Washington, D.C., to petition the United States for an “Indian Day.” James also travelled state-to-state seeking support for U.S. citizenship to be extended to American Indians which did not happen until 9 years later in 1924. Later in 1915, the annual Congress of the American Indian Association in Lawrence, Kansas formally approved a plan concerning American Indian Day for the state.

The American Indian Association president at the time Reverend Sherman Coolidge, an Arapaho Minister also issued a proclamation on Sept. 28, 1915, which declared the second Saturday of each May as an American Indian Day and contained the first formal appeal for recognition of Indians as US citizens. Following Kansas’s lead several states followed suit in 1919 by declaring days in early September honoring America’s first people. Once heritage month reached the government level it was first presented as a day of observance, then a week in 1986 due to prompts from Congress. Both law and proclamations passed by Congress recognized American Indians as the first inhabitants of the lands as well as made mentions of their contributions to United States.

Since that time as requested by Congress, Presidents have been making proclamations yearly honoring the achievements of the American Indians. The National Congress of American Indians says this “month is a time to celebrate rich and diverse cultures, traditions, and histories and to acknowledge the important contributions of Native people. Native American Heritage Month is also an opportune time to educate the general public about tribes, to raise a general awareness about the unique challenges Native people have faced both historically and in the present, and the ways in which tribal citizens have worked to conquer these challenges.”