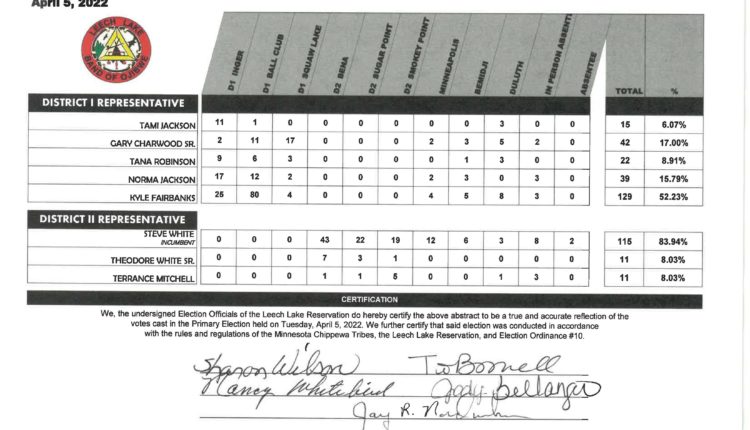 CASS LAKE- The Leech Lake Election Board has certified the results of the 2022 Primary Election held April 5, 2022 on the Leech Lake Reservation.

Both prevailing candidates received over 50% of the vote during this primary election, and keeping in line with the MCT election ordinance, they are declared the winners and no general election for either position will be held.

The June General Election will take place on Tuesday, June 14, 2022. On the General Election ballot will be Secretary-Treasurer and an important referendum question regarding blood quantum from the MN Chippewa Tribe. Local level races including Local Indian Council, Housing Board and School Board will also take place on this date.

Elected candidates will serve a four year term beginning in July 2022 and ending in 2026.

Editor’s Note: We have witnessed some confusion over the circumstances regarding the Secretary-Treasurer election and we would like to reiterate some of the information we have previously shared. For any of our MCT Tribal Elections, if two or fewer candidates file for a position there is no Primary Election held and the contest automatically moves forward to the General Election. The top two candidates in each Primary Election contest will also advance to the General Election, unless they are able to secure more than 50% of the votes cast. When this occurs, they are declared the winner and no General Election is held for those races.

The election for the Secretary-Treasurer position will be carried out as normal even though there is only one certified candidate who will appear on the ballot. This will include voting, polling places in all three districts and other election procedures as prescribed by the MCT Election Ordinance. Find our coverage on the certifications here.

We have also received several inquiries on whether write-in options will be available for the Secretary-Treasurer race, the answer is no. All candidates seeking office must file during the filing period in January and must also be certified in order to run for and hold office.