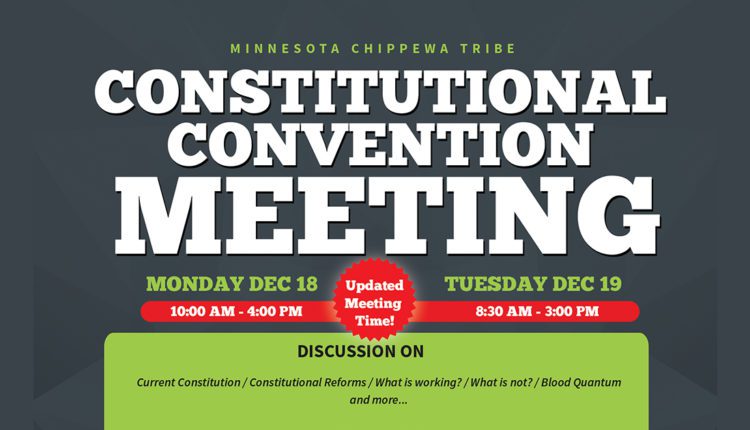 All MCT Band Members living in the vicinity of the Leech Lake Reservation are encouraged to attend this important meeting regarding the Constitution of the MN Chippewa Tribe.

This meeting is part of an ongoing effort by the Tribal Executive Committee (TEC) of the Minnesota Chippewa Tribe (MCT) to engage the public in discussion regarding potential constitutional reform.

The meetings are being facilitated by the Native Institute (NNI) of the University of Arizona, with support from the Native Governance Center. Each tribe can also designate a co-facilitator to assist in planning and conducting the event on their reservation.

The purpose of these meetings is to allow individuals to attend and express their concerns with the present Constitution as well to present their ideas for a new or revised Minnesota Chippewa Tribe Constitution. Each meeting begins with a strategic thinking exercise where participants are asked  to finish this statement: “I want my (grand) children to live in a tribal community where …”. By the end of the two-day meeting participants will have generated a list of suggested changes to the Constitution, Tribal Government structure and any other issues they choose to address. All of the results and findings from each of the meetings will be compiled and delivered to the MCT-TEC by the Native Nations institute.

At a special meeting on June 29, 2017 at Northern Lights Casino in Walker, the TEC voted to schedule these informational meetings. Leech Lake Chairman Faron Jackson said, “It seems bizarre that we have to operate under a constitution that was designed by the federal government.”

The current Constitution was adopted by members of the six MCT Bands as part of the Indian Reorganization Act of 1934. Several TEC members and others in attendance at the special meeting stressed that it is out of date and was created by the Bureau of Indian Affairs — not by tribal members.

The Constitutional Convention Informational meeting for the Leech Lake Reservation will be held, December 18 from 10am to 4pm and December 19 from 8:30am to 3pm, at the Northern Lights Casino Event Center (see Day 1,  Day 2). All MCT Band Members and interested persons are encouraged to attend.

View the flyer for this event

Other upcoming meetings also have been scheduled. In Minneapolis on December 14 &15 at the InterContinental Hotel in St. Paul and in Grand Portage on January 22 & 23 at the Grand Portage Lodge and Casino. More info on those meetings are available here.

About the MN Chippewa Tribe

The Minnesota Chippewa Tribe (MCT) consists of the Bois Forte, Fond Du Lac, Grand Portage, Leech Lake, Mille Lacs, and White Earth reservations. The MCT was created in 1934 and formally recognized by the Secretary of the Interior in 1936. It serves as a centralized governing body for the six tribes, representing an estimated total population of 41,000 Native Americans.

The Tribal Executive Committee (TEC) is composed of the Chairman and Secretary-Treasurer from each of the six member bands. The TEC selects from within the group a President, Vice President, Secretary and Treasurer for two-year terms. The remaining officials act as board members.

Learn more about the MCT Constitution

An important aspect of any Constitution is to outline the rule of law for the nation and creating a system
of governmental powers that outlines the rights of members and responsibilities of elected officials. The
articles are like chapter headings, describing the purpose of each portion, each article is then separated
into sections, like paragraphs. One Article grants each RBC the authority to make decisions on their own
reservation.

Many constitutions have a three branch government that check and balance each other, typically a
legislative branch that makes laws, an executive branch that executes the laws and a judicial branch that
interprets the laws. Our MCT Constitution does not have a three branch system instead our elected
officials serve as lawmakers, executors, and ultimate decision makers; in fact in 1980 the TEC issued an
official interpretation that they (the TEC) were the only ones who could interpret the MCT Constitution.
Constitutions also outline who their citizens are and the boundaries of their jurisdiction. Over time our
MCT Constitution has changed. The original MCT Constitution was adopted on June 18, 1934 and
approved by the Secretary of the Interior on July 24, 1936, pursuant to the authority granted in the 1934
Indian Reorganization Act. A Corporate Charter accompanied the MCT Constitution, ratified on
November 13, 1937; it was ultimately revoked by an act of Congress on February 12, 1996. This
Constitution has up to two delegates from each community within each reservation; there were about 65
elected officials. The delegates then selected two people from each reservation to serve as the Tribal
Executive Committee (TEC). TEC members then selected who was going to be the President, Vice
President, Secretary and Treasurer.

Citizenship within the MCT was debated for a long time, our leaders at that time wanted all descendants
included in membership, but were forced to agree to use the 1/4 degree blood quantum that we still have
in effect today.

Our Constitution, this has changed a little overtime with referendums approved by voters and the
Secretary of the Interior. The first change happened by a referendum of voters in 1963, the Assistant
Secretary of the Interior approved the Revised Constitution on March 3, 1964. This change created the
“Revised” Constitution, removed the local charters, created the Reservation Business Committee
structure, implemented 1/4 degree blood quantum, and changed term limits from 1 year to 4 years.
More changes were approved by voters and the Secretary of the Interior in 1972. Footnotes on the MCT
Constitution, 1972 version, highlight changes: 1. Voting age was changed to 18, 2. Candidates for office
must be at least 21 years of age as well as enrolled in and reside on the reservation of their
enrollment. Before the 1972 constitutional amendment, the MCT acted more like one. People were
eligible for services on any of the six reservations and could even run for office on any reservation as long
as they were enrolled in the MCT.

The current MCT Constitution can be changed by a vote of the people, 20% of the resident voters or 8
members of the TEC can ask the Secretary of the Interior to call for a referendum where all MCT
members are then allowed to vote on a proposed change. The Constitution requires 30% of those entitled
to vote must vote and if a majority of the voters agree, the change is implemented.