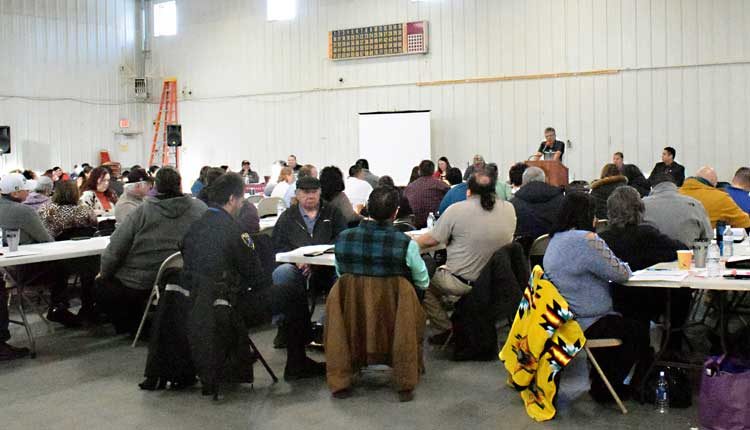 Last on the agenda were presentations from Division Directors in attendance on their activities over the past three months. Time was also dedicated for audience members to address the council directly with their ideas and concerns for the band.

Quarterly Meetings are held every three months on a rotating schedule between each district on the reservation. The next Quarterly Meeting will be held in April, 2020. All band members are welcome and encouraged to attend.

Tribal Court
● There were 78 new cases filed between October 1st, 2019 and December 16th, 2019.
● The court conducted 238 hearings this quarter.
● The court hosted officials from JDAI (juvenile detention alternative initiative, a core group of team members was later selected to meet once a month to address the juvenile detention issue and initiative.

Tribal Development
● The Tribal housing Development Initiative continues to be worked on to address bands needs for the next 20 years.
● A study done by Oweesta in October of 2019 shows the tribe is in a housing crisis. Currently 600 homes are needed to meet current low-income needs, and 1400 units are need to be added over the next 20 years to continue to meet community needs.
● The Homeless shelter was opened November 2019 to address homelessness crisis on the reservation.
● Tribal development is assisting tribal court on JDAI (juvenile detention alternative initiative)
● The capital improvement plan draft regarding construction, facilities and infrastructure needs has been completed.
● Construction is currently underway for new facility for a new child care services building.
● An Initial planning phase to determine the feasibility of converting old palace into treatment facility is taking place, this initiative is being led by human services A&D.
● The Opioid summit was held December 12th-14th, 2019 at the Northern Lights Casino.
● Tribal Development remains in the planning stage of construction of a new health division building, as the prior building was condemned.
● The Winnie dam community center construction costs has been outlined, Tribal Development will seek additional funding in the near future.

Resource Management
● The DRM Director and staff met with the Chippewa National Forest Supervisor, Darla Lenz and her staff on December 17th, 2019 to discuss issues with the “Little Winnie” and “Winnie Sands” projects, that the band is concerned with. This meeting was held as part of the groups signed memorandum of understanding with the department. The two departments will meet again January 29th, 2020 to continue discussions on the proposed Winnie sands project.
● The DRM director met with the new North West MNDNR Regional Director, Theresea Ebbenga on November 18th, 2019 to discuss the Leech Lake hunting and fishing agreement, wild rice, invasive species and the future probabilities of making the reservation a separate management zone for future state seasons and bag limits within the reservation. A meeting has been set for January 30th, 2020 to continue these discussions.
● The band will be helping the state with the development of a new grey wolf management plan which is set to be created over the next year.

Human Services
● KSTP came three times for interviews to report on positive impact on Leech Lake community that LLOTP has made. Segment will be aired sometime in February 2020.

Public Safety
● Public Safety participated in the “don’t shatter the dream mobilization” in December 2019.
● Public Safety filled all 3 crime victim advocate positions, and employees are in place providing services to community members.
● Women’s Services and Public Safety department received staff grants that includes a new DV investigator and transcriptionist for a 3 year period.
● A hazmat mitigation emergency preparedness grant was awarded to the band to provide a hazmat response gap assessment, which will create a maintenance plan and a possible hazmat rescue team and further training.

Roads and Construction
● Snow fences were installed in Oak Point and Onigum.
● Plowing services continue to be maintained.
● The Bena streets project has entered planning/design phase.

Health Services
● 165 narcan kits were purchased for the police department and EMS, this quarter.
● The Leech Lake Sober Squad has been established and has been strategizing how to provide weekly cultural events and peer recovery support in all 3 districts.
● The Opioid strategic plan was completed 12/12/19.
Getting a narcan map developed is an ongoing project.
● The Dialysis program has reached maximum capacity for taking additional clients. New patients will only be able to be accepted if they fit into an existing schedule.
● The car seat program assisted, 46 families and distributed 55 seats this quarter.
● A number of breastfeeding tents have been ordered for future community events
● A “Wecovery” walk was held, there were more than 450+ community members in attendance.
● This quarter the Leech Lake Food Distribution program served 570 low-income households for a total of 774 people.
● The Mac/Naps program gave out 123 food packages to elderly in December.