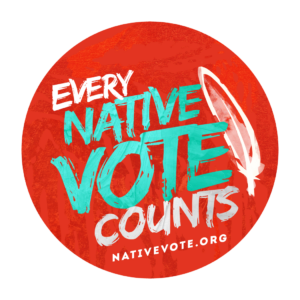 Native American voting rates are among the lowest of all racial and ethnic groups in the U.S. Almost two out of five eligible Native Americans are not registered to vote. Even among registered Native voters, the turnout rate is 5 to 14 percentage points lower than that of other racial and ethnic groups. It is imperative that we stand up and make our voices heard in local, state and federal elections!

Registered Voters DO NOT need identification to cast a vote on Election Day!

If you haven’t registered Don’t Worry! You can still register and vote on Election Day by meeting the following requirements:

**Leech Lake Tribal Enrollment will be offering free Tribal IDs to all LLBO Members from 8:00AM to 8:00PM at the Tribal Justice Center in Cass Lake***

You will need one of the following:

Don’t Forget! As long as you’re in line by 8 p.m., you can vote, even if you do not reach the front of the line until after 8 p.m.

Need a ride to the polls?

Dist III Rep. Leroy Faribanks will be coordinating drivers from the Tribal Government Headquarters on Election Day. Call 218-760-5850 to arrange a ride.

The Leech Lake Band of Ojibwe has endorsed the following candidates for office:

Local Offices
The LLBO is not officially endorsing any candidate in the local races; however, we would like to point out our band/tribal/community members running in these local races

LLBO Band Members, Others Can Register for Access to Rosetta Stone’s…